Did you know Kelowna, BC has a killer microbrew scene? This guide shows you the best local microbreweries and craft beerhalls in Kelowna. Most of them are concentrated in Kelowna's North End near Prospera Place. 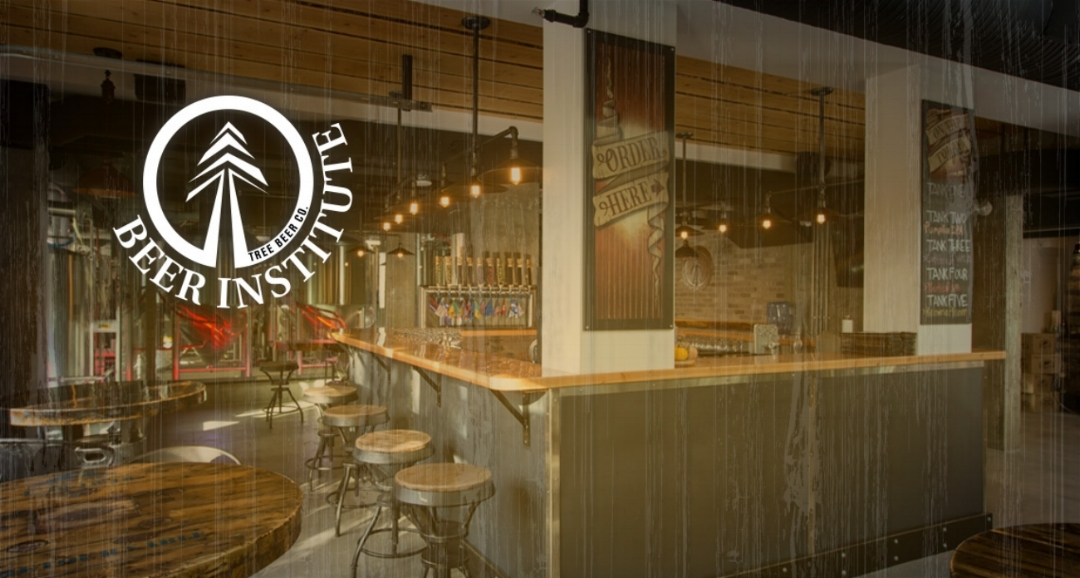 Tree Brewing is a longstanding Kelowna brewery with a spacious flagship microbrewery near the waterfront boardwalk along Water Street that launched in 2014. Tree’s Beer Institute serves hot pizza, tacos, pretzels, excellent brews, and wine and cider for those who are barley and hop-averse. With board games, large communal tables, and outdoor seating, Tree Brewing stays busy with happy beer drinkers all year round. 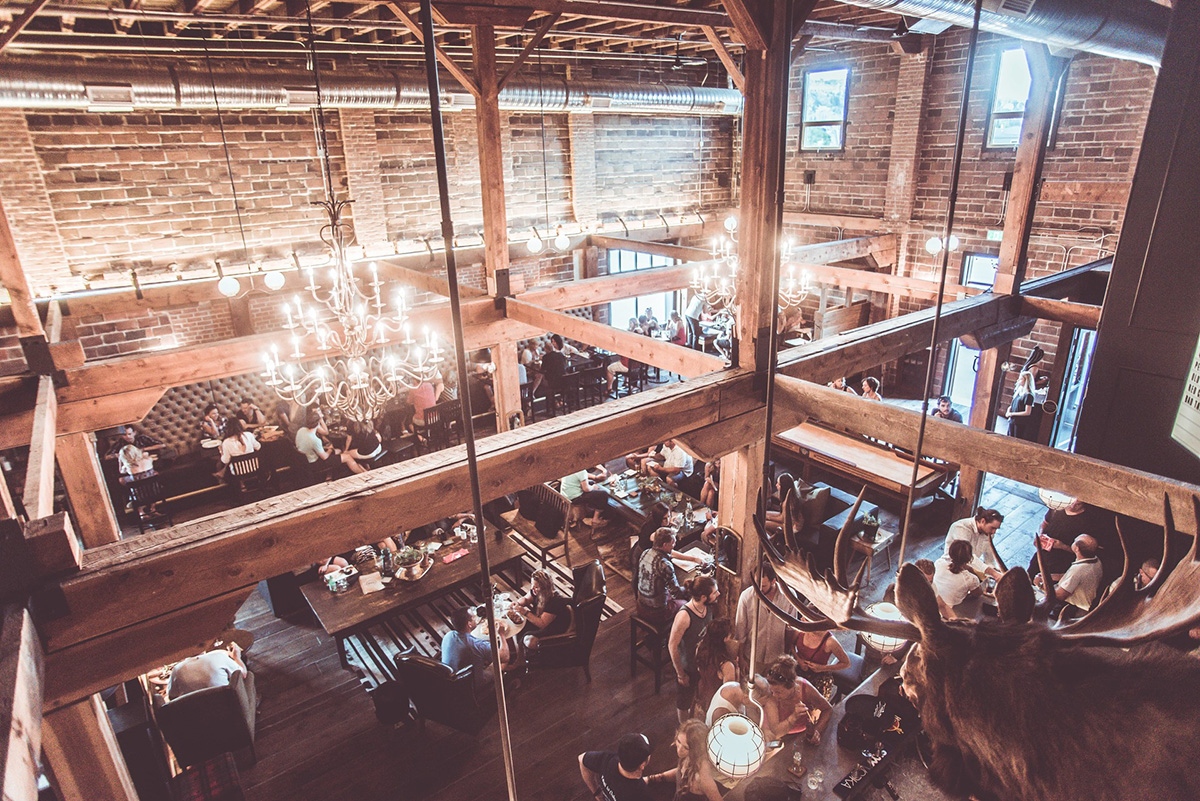 Since opening its doors to the public in 2014, ‘the BNA’ has become one of Kelowna’s go-to nightlife venues. This massive, 2-story building has 10-pin bowling upstairs, shuffleboard, arcade games, and plenty of seating options, including comfortable leather couches. The BNA attracts a diverse and fun-loving audience, serves great food, and stays open later than every other venue in this guide, so you might want to end, or also start your night there.

Smash a Dinosaur IPA, Wild Blonde, or for something actually unique to Kelowna, the Earl Grey Pale Ale. If hipster beer just isn’t your thing, there’s also an extensive wine and cocktail list. 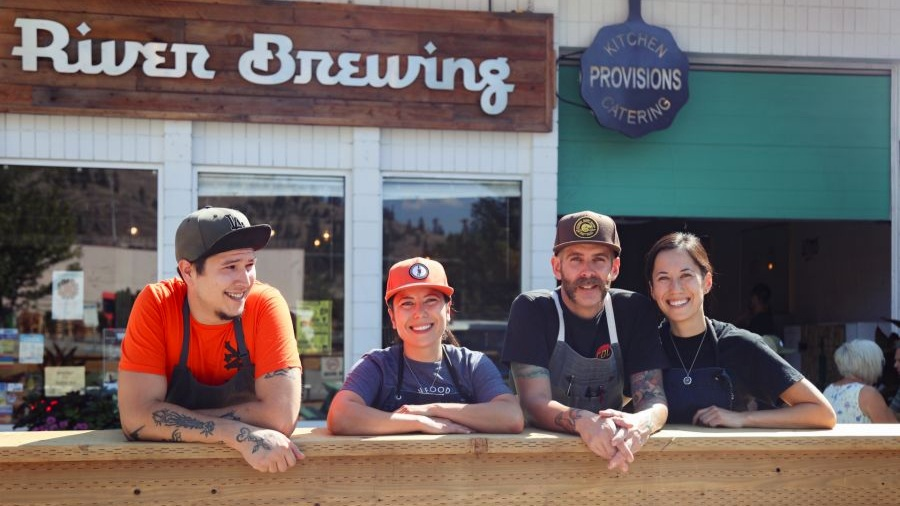 To give you a sense of what Kettle River Brewing’s tasting room is about, know that they are dog friendly, play foosball, darts, and host an open mic night every Thursday.  In other words: rad.  Their lineup of masterful and experimental craft brews is served in a not-uncommon industrial-cabin-thing building with curious art pieces to yammer over and a bright outdoor patio to hang out with your pup, human, or mobile device. 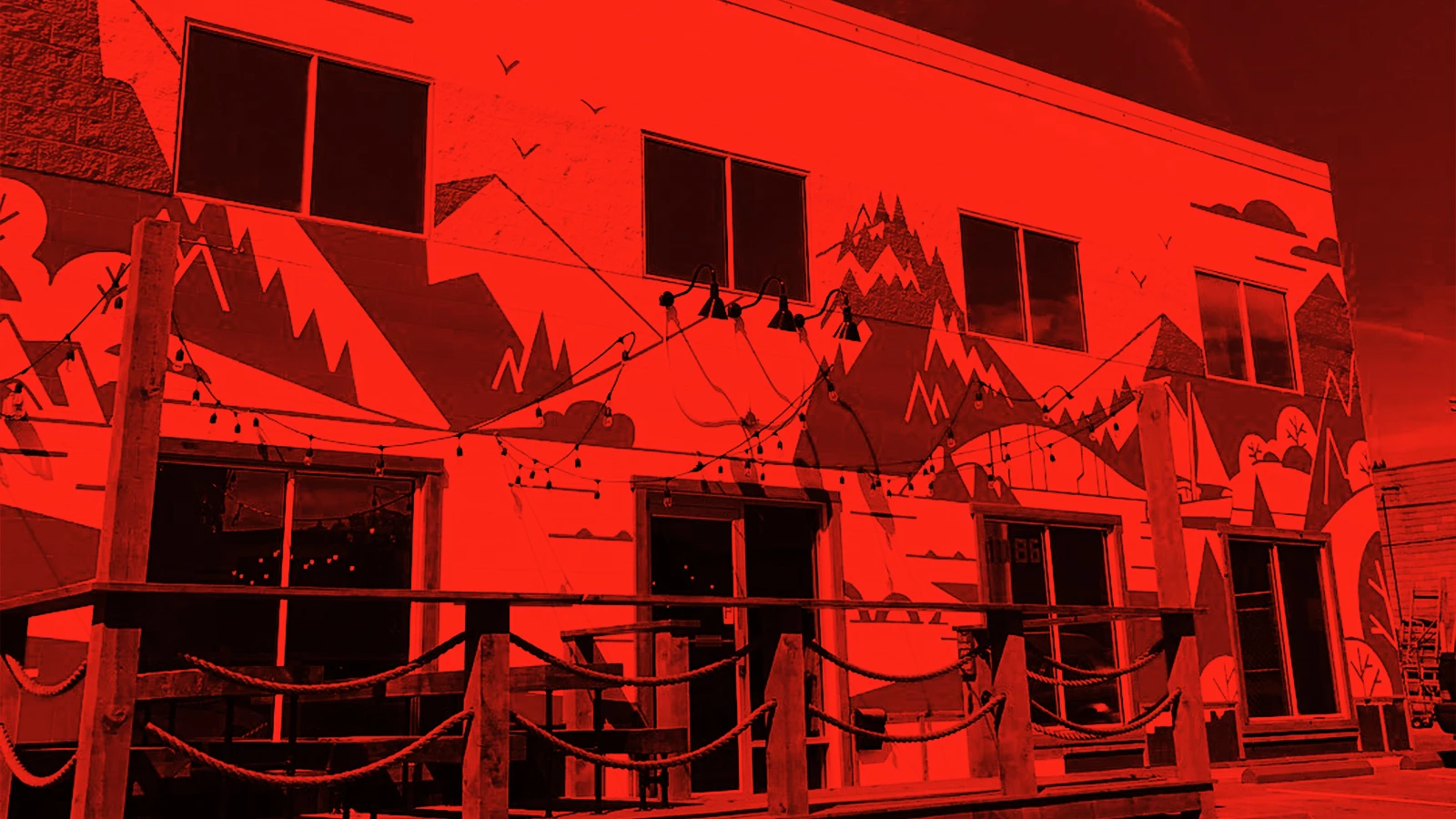 Red Bird Brewing opened its doors to Kelowna’s new north end beer scene in 2017 and is well known for their spacious patio, German Kolsch, IPA, and reasonably priced 6-packs. Their wood-framed roadside venue features communal bench tables, games, and often has a Surf Side California Taco Truck parked outside, which means you might make some new friends or at least go home with a delicious taco. 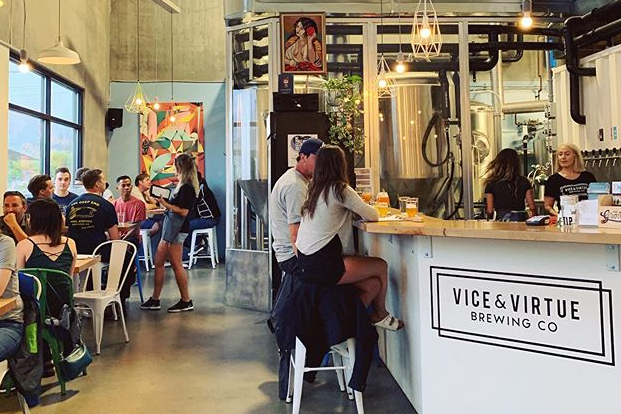 Vice & Virtue opened its ozzie-owned doors to rave fanfare in 2018 and has since won multiple awards for their fresh beers and fantastic restaurant open for brunch through dinner. Vice has a clean cut, industrial, and slightly upscale feeling going on inside and gets high praise for their virtuous charcuterie platters, cured meats, pilsner beer, and smoked brisket sandwiches. This modern, spacious, Bavarian-themed brewery is quickly becoming one of Kelowna’s most well-known microbreweries. Located next to Sandhill Wines on Vaughan Ave, Rustic Reel is the largest North End beer venue with high ceilings, catching decor, and a large outdoor patio. Whether it’s the great food or their delicious beers, they must be doing something right as they’re getting rave reviews online after one season of business. It's the only place we know of in Kelowna that serves German favorites like Schnitzel and Dunkelweizen. 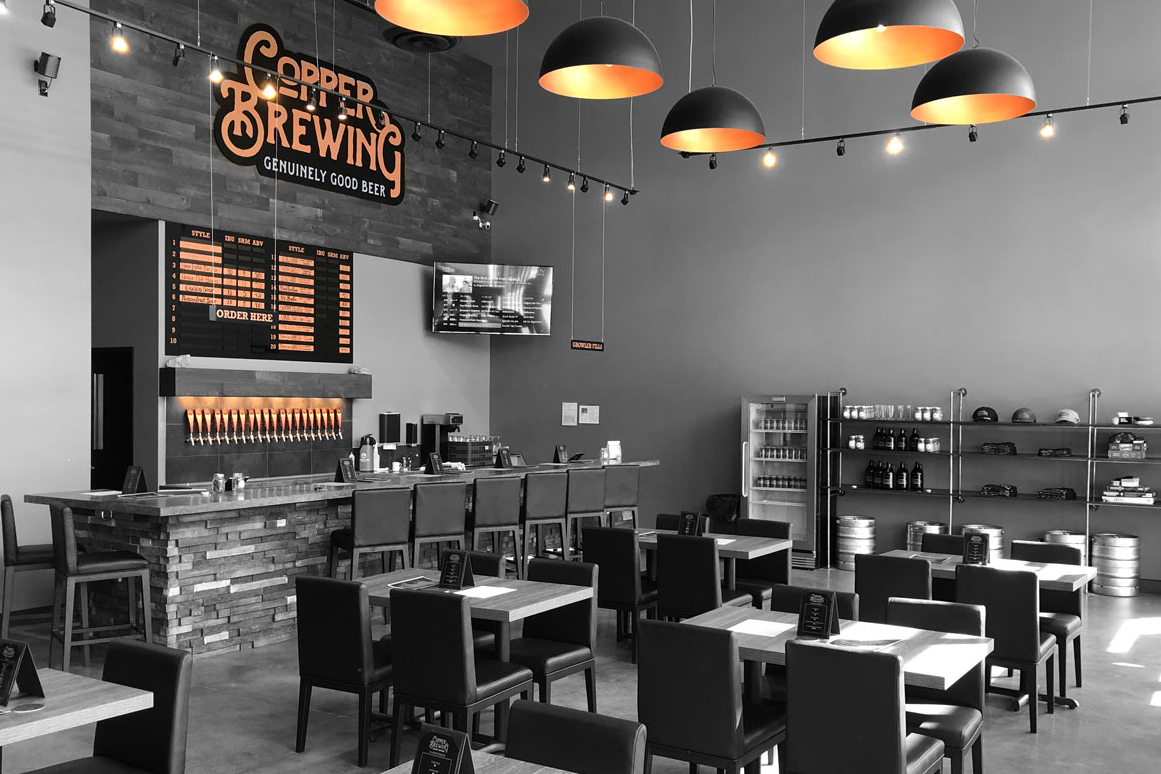 Jackknife Brewery is opened its doors to the world on Halloween night 2019, but there’s nothing scary about fun beers and fresh pizza. Jackknife is run by Brad from Kettle River Brewing, who has created an out-of-the-box 80’s atmosphere featuring "weird" brews, and beers to satisfy more traditional tastes. If his past tenure at Kettle River is anything to judge him by, we expect great things from Jackknife, but no pressure Brad.

Is Kelowna’s craft beer scene in a frothy bubble? The chart below plots the number of microbreweries with tasting rooms operating in Kelowna since 2002 - notice the explosion starting around 2012. 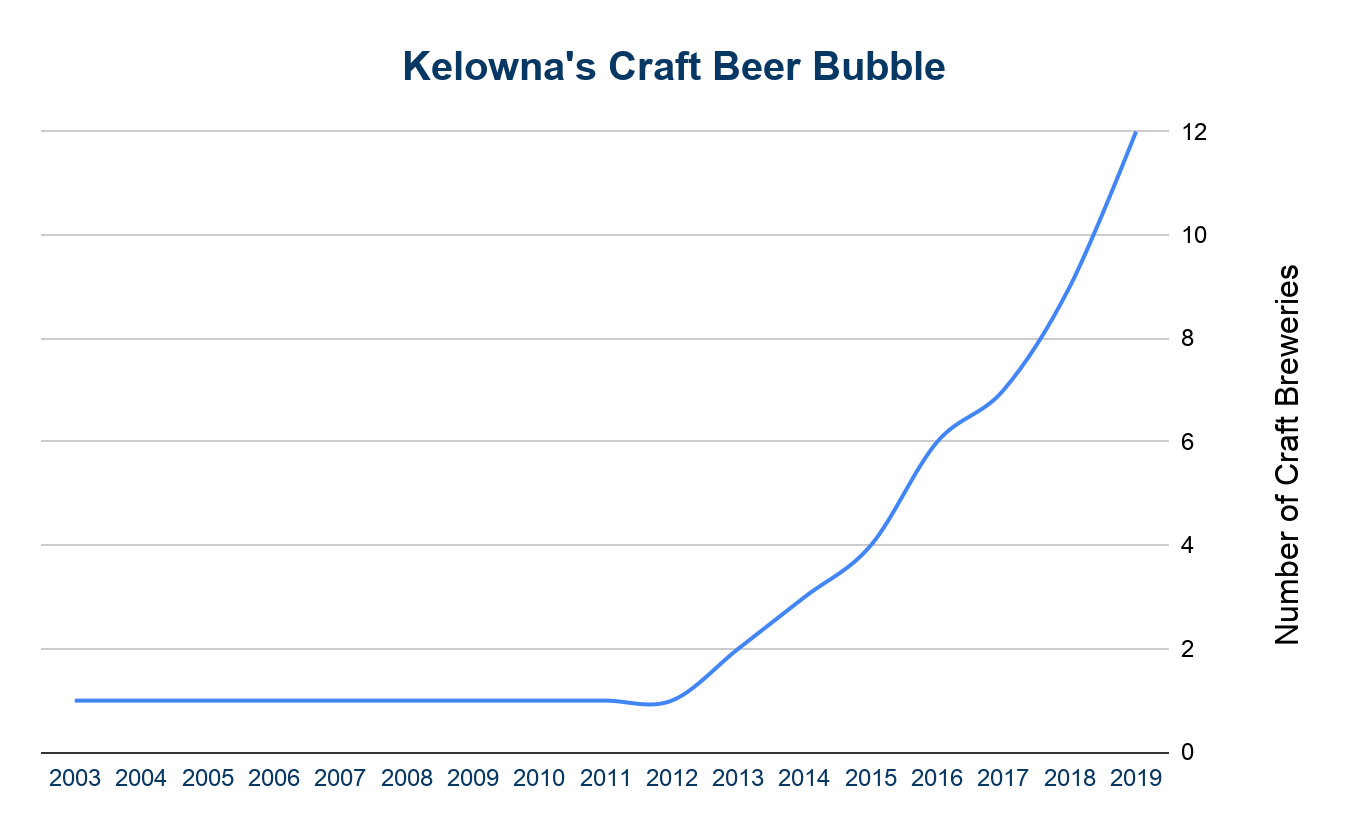 Are twelve microbreweries too many for Kelowna, a city with 132,000 residents?

Looking to Portland, Oregon, a pinnacle of the North American craft beer scene, there are approx. 84 microbreweries for 2.5 million residents, an average of one brewery per ~30,000 citizens. Are we saturated in suds at one brewery per ~11,000 citizens, or have we reached a new paradigm? Per capita, Kelowna now has 3x more craft breweries than Portland.

The good news for beer drinkers is that with 12 Kelowna microbreweries competing for your hard-earned dollars, competition - meaning cheaper beer - is likely to flow your way very soon.

You’ve read this far, now go forth and enjoy your thirsty self. 🍻

All photos are courtesy of the respective websites / official instagram accounts of each brewery.